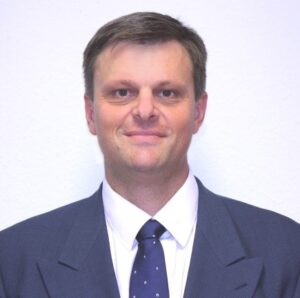 Attila Nyikos is an international lawyer by formation from the Eötvös Lóránd University Budapest, Faculty of Law and Political Sciences (1994), and obtained D.E.A (masters degree) in International Environmental Law from the University of Geneva (2001), and currently a PhD candidate of the University of Pécs Faculty of Law Doctoral school (2018). For more than 25 years Mr Nyikos has been following a legal career in varying positions, in the Ministry of Foreign Affairs, the UN Mission of Hungary in Geneva (Disarmament), Head of Legal and International Department of the National Directorate General for Disaster Management – Ministry of Interior, and most recently for 7 years as Vice President for International Affairs of the Hungarian Energy and Public Utility Regulatory Authority. As former energy regulator, Attila is an Honorary Member of and has been the Vice President of the Energy Regulators Regional Association (ERRA) and former member of ACER Board of Regulators. He was the producer, legal reviewer, co-writer of numerous books: Geothermal Atlas of Hungary (2016), Hydrocarbons in Hungary (2018), and Geothermal Budapest (2019). Mr Nyikos is fluent in English, French and Russian.