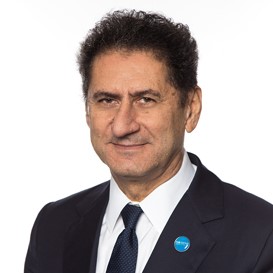 Francesco La Camera is the Director-General of the International Renewable Energy Agency (IRENA). Mr La Camera took office on 4 April 2019 and brings more than thirty years of experience in the fields of climate, sustainability, and international cooperation.

In his role, he is responsible for leading the delivery of IRENA’s work programme and strategy in cooperation with the Agency’s member states. At a critical time for climate change and the achievement of the Sustainable Development Goals, Mr La Camera is tasked with redefining the structure and operations of the Agency in response to the urgent needs of its members.

Under his leadership, the Agency has forged a series of new strategic partnerships with UN organisations including UNDP, UNFCCC and Green Climate Fund among others. A key priority of his tenure is to implement a more action-oriented approach to the Agency’s work.

Previously, Mr La Camera served as Director-General of Sustainable Development, Environmental Damage, EU and International Affairs at the Italian Ministry of Environment, Land & Sea since 2014. In this capacity, he developed cooperation and partnership agreements with a wide range of countries, particularly developing countries including Small Island Developing States (SIDS).

He served as co-chair of the Africa Centre for Climate and Sustainable Development established in Rome in partnership with FAO and UNDP and co-chaired the Financial Platform for Climate and Sustainable Development in partnership with the Italian Development Bank Cassa Depositi e Prestiti. He has also coordinated a number of national strategies including on sustainable development, green finance and fossil fuel subsides among other things.
Mr La Camera led the support provided by Italy to several renewable energy initiatives such as the Initiative for Renewable Island Energy (IRIE) and the Global Geothermal Alliance (GGA), coordinated by the International Renewable Energy Agency (IRENA).

Mr La Camera spearheaded international cooperation on issues related to climate change and the environment. He played a key role in developing initiatives between Italy and multilateral organisations such as the World Bank, the African Development Bank, UNEP, UNDP and FAO, to implement the Paris Agreement and the Sustainable Development Goals.

He chaired the meetings of the Signatories to the Aarhus Convention led by the United Nations Economic Commission for Europe (UN-ECE) and chaired the advisory board for the Convention’s implementation.
Author of many publications, Mr La Camera was a Lecturer of Sustainable Development at the University of Cosenza and of Environment & Land Economics at the University of Roma 3. He began his career as an economic analyst at the Italian Ministry of Budget and Planning.

Mr La Camera is a national of Italy and a graduate of the University of Messina in Political Sciences (Economic Policy major).